To Hell with Babe Ruth 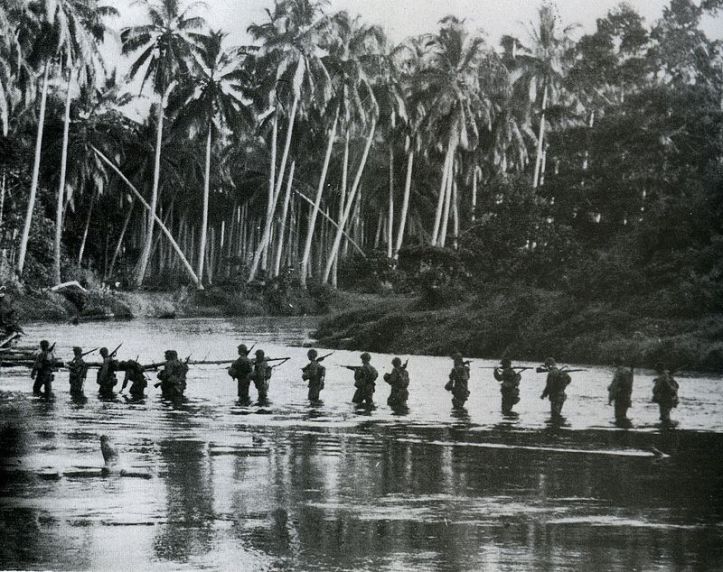 What do we know about the existence of contemporaneous firsthand or the reliability of secondhand accounts of Japanese soldiers storming or generally taunting U.S. troops in several Pacific island battles during WWII with the yell, “To hell with Babe Ruth!” (or “To hell with Roosevelt!” or even less sanitized versions such as “Fuck Babe Ruth!”)?

Although it’s widely said that U.S. Marines and G.I.s encountered such “banzai charges” or taunts in various Pacific battles, a search of U.S. newspapers printed during the war and shortly thereafter turns up only one news report presenting this as an actual occurrence, and even then it is only specific to one campaign.

The following very brief Associated Press piece describing what was said to have happened at Cape Gloucester, New Britain (New Guinea) appeared in newspapers across the country in the first two weeks of March, 1944.  (The initial U.S. assault on Japanese forces in Cape Gloucester took place in late December, 1943; fighting continued until late April, 1944.)

“To hell with Babe Ruth!”

The charge was scored as an error. Thirty Japanese were struck out for good.

“I hope every Jap that mentions my name gets shot – and to hell with all Japs anyway.”

Curiously, similar anecdotes — very much presented as jokes and not real incidents — had appeared in newspapers the previous summer. These earlier tellings are set in Guadalcanal, where fighting took place from April, 1942 to February, 1943. Here, the joke is extended, offering us two punchlines, one targeted at Roosevelt (or sometimes the New Deal) instead of Babe Ruth.

POLITICS: This is a story told at Guadalcanal – of a new arrival who admired a souvenir necklace of Jap army emblems worn by a veteran Marine. “How can I get a necklace like that?” asked the newcomer . . . “It’s easy,” the veteran explained. “Go into the jungle, get into a foxhole and holler: ‘Hirohito is a soandso.’ A Jap’ll run at you, then knock you off” . . . The newcomer went into the jungle, but returned empty-handed. “Didn’t you see any Japs?” the veteran asked him . . . “I did,” replied the newcomer, “I dug a foxhole and yelled ‘Hirohito is a soandso.’ Then a big Jap jumped up in front of me and hollered ‘Roosevelt is a soandso.’ Well, man, I just didn’t have the heart to shoot a fellow Republican.'” [From Leonard Lyons’s “Loose-Leaf Notebook” column, The Washington Post, 15 June 1943, Pg. B6.]

Of all the stories that came out of Guadalcanal, Jimmy Dykes, manager of the White Sox, tells the prize. It concerns the Little Marine from Texas, who came off patrol daily bringing a dead Jap with him.

Finally, relates Dykes, the exploits of the Little Marine reached the ears of the colonel who demanded to know the wherefore of the fellow’s daily success while his buddies came back empty-handed. “So the little colonel sends out a big sergeant from Maine to accompany the Little Marine and learn his secret of knocking off a Jap daily,” Dykes continues.

Anyway, back came the Little Marine and the Big Sergeant from their day’s work, and the little fellow has his Jap while the sergeant has nothing to show. The colonel called the sergeant in for a report. “How does this little guy do it?” he demanded.

“Well, it’s like this, sir,” reported the sergeant. “That little guy lays in the brush and yells ‘To hell with Hirohito,’ and pretty soon some Jap gets up on his feet and yells back ‘To hell with the New Deal,” then this little Texan pots him on his 30-30 and has got a dead Jap.”

The colonel demanded to know why the sergeant couldn’t use the same tactics and get himself a Jap.

“I’m sorry, sir,” said the sergeant, “but you see I’m from Maine, and when those Japs say ‘to hell with the New Deal’ I can’t shoot no good Republicans.”

By September, 1943, even Eleanor Roosevelt had gotten in on the act. In a government-produced newsreel aimed for theater audiences back home and military personnel overseas, the First Lady recounts for a group stationed in the Pacific “a story that abounds at home and just delights my husband.” She continued, “It has to do with you boys who have been up to Guadalcanal and various other places and I think I’ll tell it to you because it may amuse you as much as it always amuses him. In fact, it’s a story that came from here and you may know it.” And then she proceeded to tell the joke. (Because the laughter of those present drowned out her follow-up “shoot a fellow Republican” bit, studios such as Paramount and Universal edited the newsreel for moviegoers, either by captioning the second part of the joke or by lopping it off entirely.)

A columnist for The Los Angeles Times complained that the anecdote told by Mrs. Roosevelt was “pretty ancient,” having circulated in Hollywood circles six months earlier.

It’s possible, of course, that such jokes were based on Marine accounts told as true that just didn’t make it to the pages of family newspapers (perhaps because of profanity). Nevertheless, “to hell with Roosevelt” jokes set in Guadalcanal show up in American  newspapers before “to hell with Babe Ruth” news accounts set in Cape Gloucester.

Moreover, another anecdote that relied on the line “To hell with Babe Ruth” had circulated before the war.

JUDGE K.M. LANDIS: An American sailor stationed aboard the warship which had been ordered to England for the coronation met a British tar in a London pub immediately after the ceremonies and both got lit up. The Britisher proposed a toast: “To the new King,” to which the Yank replied: “Oh, t’hell with him” . . . The other repeated belligerently: “To the new King,” and again came the reply: “Oh, t’hell with him” . . . “Is that so?” the enraged Britisher returned. “Well, then t’hell with Babe Ruth.’ [From Leonard Lyons’s “The Post’s New Yorker” column, The Washington Post, 12 June 1937, Pg. 8.]

There is a story going the rounds of a British sailor and an American sailor standing at the bar insulting each other one night. Said the American: “To hell with your King!” The Britisher pondered for some time and then retorted: “To hell with Babe Ruth!” [From William Fulton’s “Troop Rivalries Keep Bermuda Police on Alert; British and U.S. Soldiers Engage in Brawls,” The Chicago Daily Tribune, 2 September 1941, Pg. 7.]

What do we make of this chronology, then?

Do we have firsthand accounts of such “Roosevelt” or “Babe Ruth” incidents from U.S. troops involved in the war in the Pacific? Anything preceding combat in New Britain? Anything specific to Guadalcanal?

This site uses Akismet to reduce spam. Learn how your comment data is processed.